"At every level, the school achieves its aim of achieving potential through challenge and care."
- ISI Inspection Report, March 2015

St George's International School Luxembourg welcomes students of all nationalities between the ages of 3 to 18+ years, whose parents desire an English speaking, international education for their children.
The school follows the precepts and practices of the National Curriculum of England and Wales, tailored to meet the needs of an independent overseas school.

St George's is supported by the City of Luxembourg and the Ministry of Education, and enjoys the patronage of the British Ambassador to Luxembourg, Robert John Marshall. It is a member of the European Council of International Schools (ECIS), the Society of Heads, The Council of British Independent Schools (COBIS) and the Council of International Schools (CIS). It is also subject to regular inspections by the Independent Schools Inspectorate (ISI). For a copy of the most recent report, click here. The report from March 2015 is available here. As one of only three schools worldwide, St George's also passed the Patron's Accreditation and Compliance Survey conducted by COBIS in February 2017. Click here to see a summary of this report. 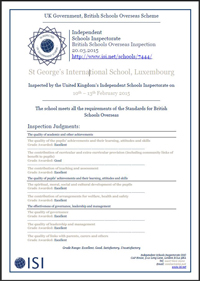